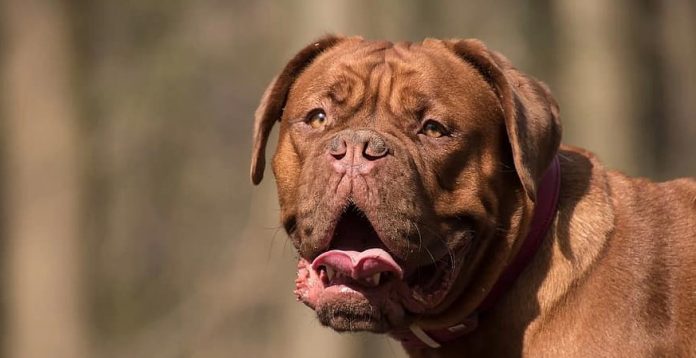 Having a pet dog means that you’ll soon become well acquainted with their slobbery dog kisses. Unlike humans, who have well demarcated upper and lower lips, dog lips aren’t designed for them to pucker up with.

In fact, you might find yourself wondering: do dogs have lips at all? Because when you look at their mouths, their mouth seems to be lined continuously with one seamless boundary.

But dogs do have lips, and they are quite different from human lips in both structure and function.

When talking about dogs, the word ‘lips’ refers to the entire lining of their mouth, bordering both the upper and lower parts.

Unlike in humans, there are no separate upper and lower lips, per se. Rather, dogs have a soft tissue lining that covers the edges of their lip ‘flaps’ and lines their mouth, covering the entire oral cavity.

Dogs ‘lips are a highly vascular structure, with rich blood supply beneath the surface. They are also extremely well innervated, and very sensitive. The upper lip also houses whiskers around the nose.

Dogs’ lips also differ so drastically in structure because of their larger range of function. Human lips are small, tightly lined, and keep the round to oval mouth opening closed and protected. In dogs, this opening extends the entire way down the jaw, because the lower jaw in dogs opens much wider.

This is also one reason why dogs’ lips are so seamless. If you look at puppy lips, their lip lining is more closely woven, because they are still suckling. As puppies grow, their lip lining grows to accommodate their mouth’s wider shape.

Dogs’ teeth can be fully exposed, unlike humans. This is because of their descent from wolves and larger canines, which are hunters in nature.

Dogs also employ their lips in a variety of ways to show body language. For example, if your dog raises his hackles warningly at another dog, the other dog will quickly scurry out of his way or growl back.

What Are Dogs Lips Called?

However, a dog’s upper lip is a completely different story. Dogs’ upper lips are called ‘flews’. Depending upon the breed of the dog, these can be small and thin and barely cover the mouth opening, eg. chihuahuas, Jack Russell terriers. But in other dogs, like hounds, the flews can be large, fleshy, and hang down low over the jowls.

In fact, in the more ‘jowly’ dogs like bulldogs, the flews form large and pouchy cheek pockets. This is one of the reasons these dogs drool so much, because their cheek pockets are constantly filling up with saliva, which then rolls out of their mouths.

The large flews in these dogs facilitates wider mouth opening. Mastiffs, for example, can use their entire wide jaw to chomp down and clamp down on something they’re immobilizing. In dogs with lips like these, the folds of the upper lip can unfold to allow this wider mouth opening.

The flews can be so large in some dogs, like Basset Hounds, St. Bernard, or Newfoundlands, that they cover up the entire lower lip. Someone who sees that will definitely wonder- do dogs have lips at all?!

Why Are Dogs Lips Black?

Most dogs whose lips you can see clearly, have black lips. The black lips stand out even more dramatically in white or fluffy light colored dogs, like Pyres or Pomeranians, or Samoyeds. These dogs typically are very white, with dramatically black lips and noses.

But do all dogs have black lips? Actually, no! Whether or not a dog has black lips and/or a black nose depends on the amount of melanin.

Just like humans, the amount of melanin present in the skin lining decides the color. Melanin also ascertains what fur color, eye color, and nose color a dog will have.

Unlike in humans though, the color is not dependent on sun exposure. Dogs’ noses and lips can be black, dark brown, light brown, dusty tan, blueish grey. and even pinkish white.

It’s not always dependent on genetics, too. Gene expression is not very consistent, and some dogs even have spotted noses and lips.

But dogs who have dark or black noses and lips are much better protected from the sun than their pink-nosed counterparts.

Why Are Some Dogs’ Lips Bumpy?

Although dogs’ lower lips are not as large as their upper lips, the lower lips have small bumps along the lining. These can be as small as small serrations, or large enough to look like small finger-like projections, that extend up to the gums.

Although their function is not precisely known, it is thought that the serrations on dogs’ lower lips were developed over centuries of evolution to make sure that their sharp teeth do not damage the sensitive edges of their mouths.

The projections form little grooves that cushion the dogs’ sharp teeth resting against their lower lip, which protects the lip from being cut. Many other animals also have this feature.

However, it is important to know when these serrations are normal, and when they are not.

What Are These Unusual Bumps on My Dog’s Lips?

If your dog has unusually large or irregular bumps along the margins of his lips, you should consult a vet about this.

In dogs, sudden new growth of bumps on the lips can be because of an infection with Oral Papilloma Virus. OPV is a highly infectious virus in dogs, and causes eruptions of clusters of variously sized bumps on dogs’ lips. These bumps are usually in bunches, like little pustules.

Dogs often end up transmitting this disease among themselves because of sharing toys, sharing food dishes, or even sniffing each others’ mouths at parks, play dates etc.

The disease is unproblematic as long as the papillae are uninfected. But because of the germ rich flora in dogs’ mouths (and their horrid hygiene habits), the bumps often become infected and painful, and require medical treatment.

Do Dogs Smile with Their Lips?

Strictly speaking, dogs do not smile the way humans do. A doggy ‘smile’ is generally wrongly identified as the expression when dogs leave their mouths open like a human smile, but with their tongues lolling out. It’s often stated that dogs ‘smile’ this way to mimic humans’ expressions of happiness and contentment.

But dogs don’t smile at each other this way. Dogs do use their lips in multiple facial expressions, but not like humans. For example, if your dog is very excited, his lower lip may be quivering. But if he is curling his lip at another dog, he may be signaling the other dog that he wants to be left alone.

And while dogs don’t smile with their lips, they show their happiness by wagging their tails, lying down in contentment, sighing happily, or leaning onto their owners or friends.

Do Dogs Kiss with Their Lips?

Surprisingly, no! Even though dogs are known for showing us their affection with their sloppy kisses, they don’t kiss each other.

And if you want to kiss your dog on his lips to show him affection, maybe you should consider first: where have those lips been?