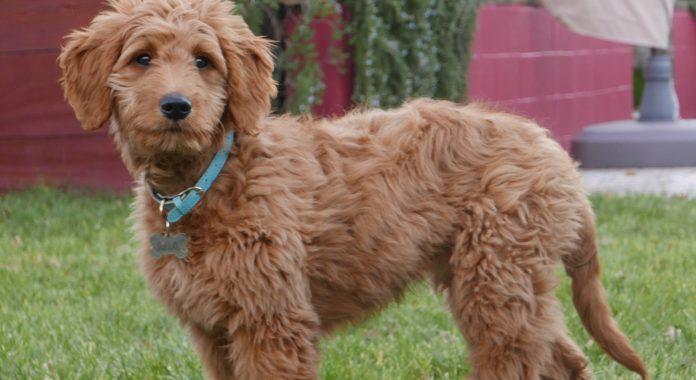 They make for cuddly, sweet and unforgettable dogs that fit into any family home. But which dog is best suited for you? And which is the better breed: labradoodle or  goldendoodle?

Labradoodle vs Goldendoodle: What’s Their Story?

Let’s start with the basics. A Labradoodle is a dog breed created by crossing labrador retrievers and poodles. The poodle parent can be a toy, miniature, or standard poodle.

The first Labradoodle has been attributed to Wally Conron, an Australian breeder, who created the first cross in 1989. Conron thought that Labradors’ gentle temperament and ease of training would help people with disabilities. He theorized that the poodle lineage would help in making them have a low shedding coat, and so, low maintenance, with lower allergy potential.

In the USA, labradoodles are not recognized as a pure breed by the AKC, because they are a hybrid and not a pure breed themselves. They are trained as guide dogs throughout the world today.

Labradoodles are a low shedding, gentle dog, and since they do not shed a lot of dander, people with mild to moderate asthma can live with them without discomfort. This makes them very popular with people from all walks of life.

Goldendoodles on the other hand are ‘hybrid’ crossbreed dogs between a golden retriever and a poodle. Goldendoodles are American dogs and relatively new. They were ‘launched’ in the 1990s in America and gained rapid popularity during this time,  because of their designer status.

Since goldendoodles also have poodle parentage, they also can come in three sizes, depending on whether they have a standard, miniature, or toy poodle parent.

Goldendoodles derive attributes from both parents’ breeds, and are much more relenting towards their owners. However they are also more skittish than either parent breed.

Labradoodles and Goldendoodles can have three standard sizes. Miniature Labradoodles average 14 -16 inches at shoulder, and weight around 15-25 pounds. Medium sized labradoodles vary between 17 – 20 inches in height, and 30-45 pounds in weight. Males are generally 1-2 inches taller than the females.

Standard labradoodles are between 21 to 24 inches in height, and weigh between 50 to 65 pounds. Again, gender influences their height, but not weight. Although: labradoodles often end up taller or shorter than originally estimated.

Standard goldendoodles, which are the larger ones, are usually 20-24 inches tall, and can weigh up to a whopping 80 lb.

Having a Labrador retriever as a parent is a guarantee of one thing: lots and lots of tail wagging, and extra large cuddles. Typically, Labradoodles are very loving. They are extremely intelligent dogs, and friendly to a fault. They are naturally curious dogs, extremely energetic, playful, and do not shy away from physical contact.

Labradoodles are vastly influenced by hereditary factors.  Early socialization and training go a very long way in acclimatizing them to sounds, strangers, and new smells, sights, and places.

So, with a goldendoodle, you have a dog who is very happy being pet by everyone on the street- expect many pet stops. Labradoodles are more conservative in their approach to strangers.

Goldendoodles are overall more approachable. They have friendlier interactions in general. But they are more mischievous. Labradoodles are more sedate and will wait till you say that it’s okay to play, while your goldendoodle will be running around planning tricks.

However: both dogs’ temperaments are largely decided by their early training, they retain their puppyhood tendencies. A puppy who was the ‘bully’ of his litter will grow up to be a dog that will listen to commands, but will challenge for dominance around other dogs.

Labradoodle Vs Goldendoodle – Appearance and Grooming

Both labradoodles and goldendoodles are soft, curly, and cuddly, when it comes to their coats. But what does this mean for upkeep?

Labradoodles are single coated dogs with coats ideally between 4-6 inches long. Their coats are not extraordinarily long or thick, nor is this a desirable trait, but there are other variations.

First generation dogs may have coats that are coarser. These dogs shed more and a particular odor of dog fur. Breeders generally try to breed dogs to avoid this variant.

Most labradoodles have a normal, fluffy coat, the wool coat version. It does not have any smell and does not shed. These labradoodles are covered in medium tightness curls. Another variant is the Angora goat type, which has silky, fine. straight hair.

Labradoodles can come in a whole palette of colors, ranging from chalky white, caramel, golden, apricot, cream, silver, bone white, red, chocolate, dark brown, and even blue. There are pattern variations as well, with sable, phantom, patched, or brindle dogs.

Medium fur coat dogs need to be brushed 1-2 times per week. Trims every 6-8 weeks help keep their coats in a manageable range.

Labradoodles do not need frequent baths and should be bathed only when required. Because of their coats, they tend to not develop an odor in any case.

Daily brushing, or at least 2-3 times a week, is definitely recommended for them. Outside dogs naturally wear their nails down. But if they are clacking on your floor inside, you know they’re too long.

Wavy coat dogs have the standard ‘goldendoodle’ appearance, and need regular brushing. These are low to average shedders. The more ‘poodle’ goldendoodles have curly coats. They’re practically hypoallergenic and almost don’t shed at all. Silky and straight haired goldendoodles shed more. But they are also the easiest to manage.

Goldendoodles have an overcoat and an undercoat. Both coats need to be brushed out. Dirt, dander, tangles, and insects can also get trapped in them, making proper brushing all the more necessary. Specialized dematting combs are a good investment here.

Goldendoodles need to have their hair trimmed at least every six weeks, or even sooner. In winter, you may get away with every 8 weeks. Puppies lose their first coat at 5-7 months, when their adult coat comes in. They should get one haircut before they turn 6 months old.

Their ear hair and faces need trims too with some dog clippers. It’s recommended to get goldendoodles used to being groomed right from puppyhood, because they will need this their entire life. The last thing you want is a woolly mammoth dog because he won’t let the groomers near him.

Professional grooming is almost the better option. At home grooming is naturally doable, but requires time to get it down to… pat.

Both labradoodles and goldendoodles have significant health issues as a consequence of crossbreeding.

Ears: both labradoodles and goldendoodles regularly develop ear infections, because of their hairy, floppy ears. The ears flop down and create moist, damp areas that are prone to becoming infected.

Hip dysplasia: both breeds are susceptible to developing this anomaly of the hip joint, in which the femur does not articulate properly in the hip joint. They can develop lameness in one or both hips, leading to restricted movement and arthritis with age. Not all dogs show symptoms outwardly till much later.

Some dogs even have elbow dysplasia, which is a similar issue but at the elbow joint. It’s seen more commonly in older and obese dogs.

Allergies: both breeds have high occurrences of allergies, both topical and systemic. Food allergies are common, but also, allergies to bedding, synthetic materials, detergents, shampoos, etc. do occur.

Epilepsy: both breeds are predisposed to developing epilepsy, a seizure disorder. It tends to manifest later in life, as the dog grows old. If you notice your dog twitching, kicking uncontrollably, drooling, or going rigid for any interval of time, you should have your vet check it out.

Progressive Retinal Atrophy: this is a degenerative eye disease in which the dogs slowly lose their vision. It usually starts with night blindness and decreased dim light vision, progressing to full vision loss.

Diabetes Mellitus: these dogs are also prone to developing diabetes with age. Heredity and obesity and diet go a long way in the onset and management of this condition.

Hypoglycemia, or low blood sugar levels, is especially a problem in toy and miniature goldendoodle puppies. Sudden hypoglycemia in these puppies can cause fainting, dizziness, collapsing, and may even be fatal, if not corrected.

Canine hypothyroidism: just like in humans, both these dog breeds can also suffer from a deficiency of thyroid hormones.

Gastric dilation volvulus: in this condition, the dogs’ stomachs lose elasticity and twist inwards with intestines, trapping air inside. This almost invariably requires surgery to release.

Patellar Luxation: because of weakened, deficient ligaments at their knee joints. The kneecap or the patella may end up dislocating in one or both legs.

Mini Labradoodle vs Mini Goldendoodle: What About These?

As mentioned, both breeds have a variant on the smaller end of the size spectrum: miniature dogs. This small size is sometimes the result of adding another dog to the mix, such as terriers, or cocker spaniels.

Mini labradoodles and goldendoodles are adorable, cuddly, sweet dogs with fabulously complex personalities. They are intelligent and can be trained easily, all the more so if they are trained early in life.

So: Labradoodle or Goldendoodle?

Although both dog breeds make for happy, energetic, loyal, and dependable family dogs, which breed suits you more depend on your requirements.

Similarly, there is the matter of upkeep to be considered. Depending on the kind of puppy you are getting, you may be looking at moderate maintenance with labradoodles, or have to invest in some serious high maintenance with goldendoodles.

Both dogs make for good family dogs and are unconditionally loyal to their owners. And they look like teddy bears!