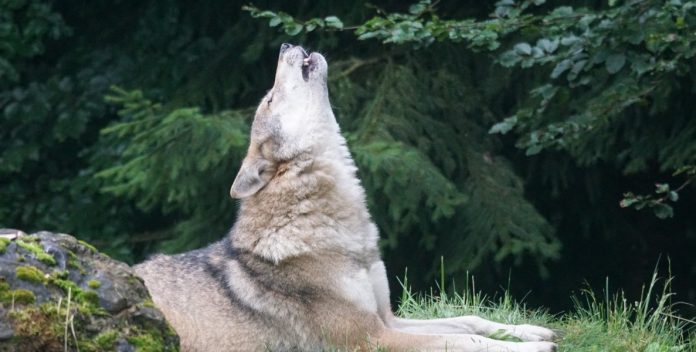 Almost all of us have seen videos on the Internet of wolves in the wild, howling together at the moon. And while in the wild it definitely serves a purpose, it’s not so beautiful when our dogs decide to do the same thing in the middle of the night.

So Why Do Dogs Howl at Night? And What Does it Mean When a Dog Howls at Night?

Believe it or not, dogs’ howling actually means more than some leftover anxious behavior. The roots of this habit like why do dogs howl at the moon, or who your dog is howling at night, stems from their canine relative, the wolf.

In the wild, wolves howl to communicate over long distances. Different members of a pack will howl from their locations. This helps them figure out each other’s positions, as well as their numbers and arrangement. This is an invaluable strategy while hunting.

Standing in your living room, your dog has not forgotten this behavior that is ingrained in him from generations. Some breeds howl more than others. But the howl will invariably be picked up by other dogs in their houses, echoing their location back to the other dogs listening in.

It’s a way of announcing their presence to the other dogs, as well as ‘declaring’ their territory, loud and clear.

Dogs also howl to signal ‘within’ their pack. If you have more than one dog, then you might be more familiar with this behavior. If your dog is separated from you, or from his friends, he will howl loudly and mournfully till he is answered.

Stray dog packs are still common in many parts of the world, and they commonly display this behavior when they are spread out over a neighborhood. It’s a way of reassuring themselves and each other that the rest of the pack is very much there. A pet dog may also decide to answer this call, and more howling ensues.

Pet dogs also howl in their sleep. Sleep whining and howling is unconscious, instinctive behavior and should never be punished. Being punished leads to deep rooted anxiety in dogs, for what is for them a very instinctive act.

Even puppies howl, when separated from their mom. For a puppy, this big scary ‘separation’ can be as little as a metre away from their siblings or parents (or you). But for a tiny pup, that’s a very scary prospect, indeed.

In dogs that suffer from separation anxiety, this behavior is very common. So if you’re wondering who your dog is howling at 3 am in the morning – it’s you. Dogs often take this behavior up when they’re being trained to spend the night alone. Excessive howling, whining, scratching, etc. are all signs of anxious behavior in dogs.

If this is behavior you’re actively trying to get your dog to unlearn, that’s good. If not, you should look into trying to make your dog more emotionally independent, because this is how unhealthy attachment from dogs is displayed.

Oftentimes, pet dogs start howling more than usual after a seemingly ‘big’ change to their usual life. This can be right after you’ve moved houses, had a life change, like a partner moving in or out, or a new baby.

This can also be closer to the dog’s level, like a new dog, or an old companion passing away. Simply put, any new or radical change to the dog’s immediate atmosphere can make him insecure and prompt him to start displaying this kind of new and/or excessive howling.

It can even be directly because of the owner. Owners who suddenly have new jobs or altered timings, may be leaving their dogs alone for longer periods of time. Dogs who are used to their masters being with them may need time to adjust to this new pattern, and develop separation anxiety and isolation distress as a result.

Usually, dogs that are in distress display destructive or repetitive behavior. This may be in the form of barking excessively at nothing, or howling all day long, in an attempt to soothe themselves. This can also manifest as chewing up furniture, shoes, wooden tables and chairs. Or even self destructive behavior, such as excessive nervous licking, or biting their own nails and tail.

They may even start peeing all over the house, or making larger messes, even though they were completely toilet trained and housebroken before. These are all signs or anxious and distressed behavior.

It’s not always a negative response, though, dogs also howl in order to celebrate something that makes them very happy. If your dog likes to play fetch and finds a very big stick, he might decide to yowl it out in happiness. The same applies to roaming in the park or simply while playing with you. Sometimes dogs howl simply because they’re so happy.

But something irritating can just as easily prompt this behavior. Musicians who practice at home are no strangers to their dogs suddenly deciding to join into the fun. Sometimes, your dog might decide to make some noise with you.

Other times, it could be that the high pitched sounds disturb him, and he’s howling his protest. He may also be bored by you being present and not focusing on him – a behavior, by the way, which should be discouraged and ignored.

Close observation of his other behavior at the same time will show you which one it is. Anyone who has seen their dog howl at a passing ambulance siren, for example, knows that that howl definitely is a protest, and not a happy yodel.

Finally, sometimes when dogs howl, it’s a sign that something is wrong. Not in the superstitious or premonition way, but physically wrong with your dog. One of the reasons why canines howl is that they want to convey that they are in pain. Maybe your dog has a stomachache or is ill.

Excessive and unusual howling in an otherwise healthy dog may be a sign that your dog is suffering in some way. In older dogs, this can be significant and require medical attention. In such cases, it’s always a good idea to go to the vet.

But it can just as easily be your dog trying to get your attention, too. Many a pet owner have rushed their dog to the vet to find that their dog was faking a cough just to get their attention. Watch your little furball closely to see if he’s trying to pull a fast one on you. And, if you’re not sure, best let the vet decide!

And, of course, some breeds of dog are simply more vocal than others. Huskies are notorious in this regard, being very hyperactive and very, very vocal. A husky who is being refused his wishes, or being asked to do something, will make sure the entire neighborhood can hear his indignation. The same goes for Alaskan Malamutes, Beagles, Foxhounds, Coonhounds, Bloodhounds, Basset Hounds, American Eskimo Dogs, and most hunting dogs.

In contrast, dogs like Spaniels, Bulldogs, Pitbulls, howl very little. Others like Chihuahuas and certain Terriers bark a lot, but howl very little. With a dog who likes to talk a lot, it’s only to be expected!