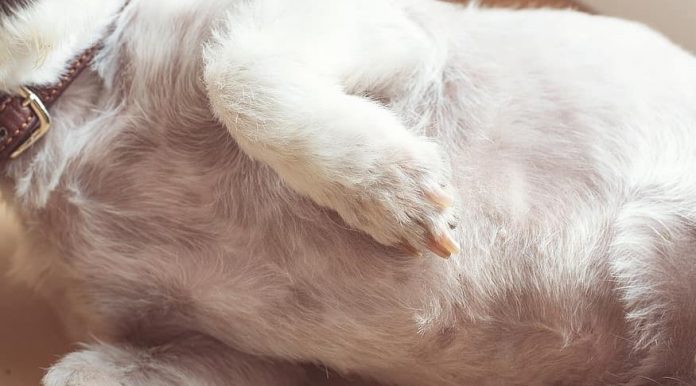 Every dog loves belly rubs, and demands them as often as they can convince their owner to provide them. And you might have wondered at some point while doing your honor-bound canine duty: do dogs have belly buttons? And if so, where is a dog’s belly button?

The short answer is: yes! Dogs do have belly buttons. Dogs, like all mammals, are connected to their mothers before birth through an umbilical cord. In human babies, the doctor delivering the baby cuts and ties the cord off at birth. In dogs, the mamma dog puts her teeth to work and does just this. And the spot where the puppy used to have the cord attached, develops into his belly button.

So, do puppies have belly buttons? Yes! In fact, if you’ve seen newborn puppies, you might have seen the remnant of the umbilical cord still attached as a stump onto the site which later becomes a dog’s belly button.

In dogs, umbilical cords are chewed off by the mother, so the belly button is basically a scar where the cord used to attach prenatally. Like in humans, this scar is usually an ‘innie’, that is, turned inward. It can be a practically invisible to prominent horizontal fold of skin, that becomes less demarcated with age.

However, like some humans, some dogs also have ‘outie’ belly buttons. In humans, this is often blamed on inexperienced doctors and clumsy snipping, but the cause is actually quite something else.

Under the layers of skin, the abdominal wall has layers of muscles overlapping each other. When these muscles do not knit properly at the site of the belly button, they form a tiny, outward protruding hernia, which forms the outie belly button.

In dogs, just like in humans, this can turn into a site of abdominal (umbilical) hernias in later life, when the belly muscles become lax with age or disuse.

What Are Dogs’ Umbilical Cords For?

Dogs are mammals, just like humans. This means that they carry their young ones in utero after conception and give birth to them.

Where Are Dogs Belly Buttons?

In dogs, the thorax and abdomen are shaped differently. The belly button therefore lies at the apex of the hollow under the rib cage. The junction between the lower 1/3rd and the upper 2/3rds of a dog’s body, gives you the approximate location.

Also, unlike in humans, dogs’ belly buttons lie between their nipples. Dogs have multiple sets of nipples on them. The belly button is usually found between these. If you have cats, you might have found their belly buttons in roughly the same place.

Depending on the reed, dogs usually have a lot of fur on their abdomen. Even short haired varieties have decent fuzz all over their bodies. This also includes the belly button area.

In some dogs, the navel is surrounded by darker and sometimes longer fur than in other areas of the abdomen. This can be harder to distinguish in females that are currently feeding or have fed a litter, because they have pouchier abdominal flaps.

Do Dogs Have Umbilical Cords?

After birth, the umbilical cord has no function to serve. In fact, it may even pose a problem during birth.

To avoid this, the mama dog will bite off the umbilical cord as soon as the puppy is born. The tiny little stump that is left afterwards proceeds to dry up and fall off within the next 1-3 days, but at maximum within the next 10 days, leaving only the tiny belly button behind on your precious puppy’s little belly.

If you have asked your vet, you can even help the mama dog keep the cord stump clean. The mama dog will usually lick it clean, but if you’ve taken over cleaning duties, wiping it with a moist, soft, mildly disinfectant wipe to make sure it is not soiled will suffice.

Do All Animals Have Belly Buttons?

The second group comprises Marsupial mammals. This group gives birth to very underdeveloped young ones, which they then carry around in a little marsupial pouch, till the baby is independent enough.

So animals like Kangaroos and Wallabies feed their young in utero through a structure called the Yolk Sac, and then directly through a nipple in their pouches, after birth.

There’s also a rare group called Monotremes, which includes only five species, like Platypuses. These animals lay eggs, and feed their babies milk after they are born.

As a result, the only animals that have belly buttons are placental mammals. Nonhuman animals also almost always give birth to and eat the placenta after their babies are born. In nonhuman animals, this provides them with hormones needed to kickstart milk production, as well as their mommy instincts.

Although, some humans have picked up on this as well, although no health benefits have ever been proved till date. One thing is for sure, dogs have belly buttons, but belly button piercings are still an exclusively human feature!