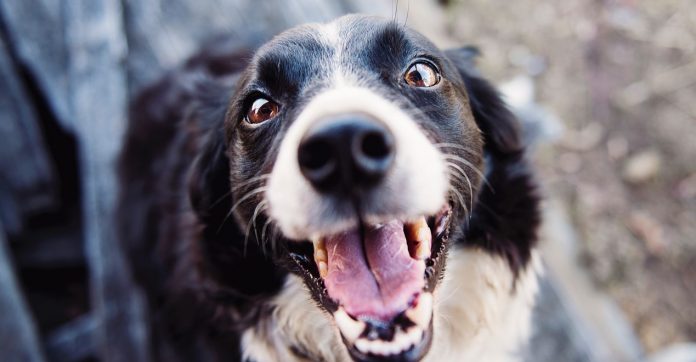 Whether your dog looks up to you or not, is he physically looking up to you? If movie myths are to be believed: can dogs look up at all?

Dogs can look up in two ways: by moving their head, and by moving their eyes. Humans also look up similarly. But in dogs, these movements are severely restricted because of the anatomy of their skulls and spines, and by the limited movements of the muscles around their eyes.

So if you call your puppy from above, you might be a little concerned to not see your puppy looking up properly. But this is only natural, and normal for dogs.

Dogs’ skulls are attached onto their spines differently than in humans. The joint is not as freely mobile. As a consequence, dogs’ skulls do not have the same freedom of motion on multiple axes.

But dogs can move their skulls upwards, if you’ve ever watched your dog, you’ll know that when he has to move his head up beyond a certain angle, he sits down to do it. When standing, dogs’ spines are horizontal. When they sit down, their spines are oblique, and therefore their head moves more ‘up’ at an angle.

The same also applies to their eyes. When dogs want to look up, they can’t roll their eyes up the same way humans do. If you’ve noticed, many animals like cats and dogs move their entire heads for peripheral vision, not just their eyes. This is because of their restricted eye movements in the sockets. This also applies to dogs looking up.

Where Does The Myth Come From?

The idea that dogs can’t look up is one of those movie lines-turned-to-internet facts ideas (people who have watched the movie Shaun of the Dead will get this immediately). Because dogs can look up. Just not quite like humans.

Can Dogs Be Trained to Look Up?

Absolutely, but within reason. Training dogs to follow hand and finger movements on command is a very good basic training for them. However, you should make sure that while training your dog, you don’t force him to look up beyond what is natural and normal for him.

Can Dogs See the Same Way Though?

Dogs’ vision is not as developed as their sense of smell. For the most part, at 20/75, dogs have good vision. Certain breeds, like Labradors, Terriers, etc. have much better developed vision than their canine relatives of different breeds and have almost 20/20 vision.

At the same time, the range and depth are much different from human vision. Dogs are famously color blind, and cannot see red, yellow, orange, and green.

However, a distinguishing factor is also their lack of complete binocular vision. Unlike humans, whose eyes are at the front of their head, dogs’ eyes are slightly to the side, because they are predators in nature.

Depending on the breed, dogs’ eyes are set at approximately 20° to their head. Flat-skulled breeds like pugs and French bulldogs have different visual acuity than collies, for example.

As a result, their vision from both eyes does not overlap completely. This gives them a more sweeping view, but less accurate. So, if you’re moving, your dog sees you more clearly than if you’re standing still.

Does My Dog See Up and Down Like Me?

Actually, no! Because of this limited binocular vision, dogs actually have bad depth perception. If you’re calling your dog from a height, he will get pretty confused. Dogs adjust for depth perception using their other senses, like tactile adjustment, texture, brightness and shadow, and position of things in their surroundings. .

So even if your dog is trying to look up and down, his judgement of how ‘deep’ or ‘high’ something is, is not calculated by his brain the way it is in humans.

How Does My Dog See Better in The Dark, Though?

So, dogs can’t see up like us, have poorer color vision, but how is it that we stub our toes in the dark, but they don’t?

The answer to this lies again in a little anatomy. Dogs have fewer Cones in their eyes, which are the cells responsible for perception of color vision and acuity of vision. However, they possess more Rods, which are the cells responsible for dim light vision and dogs’ better perception of motion. Canines are predators in nature, and these are part of their natural adaptations for hunting and following prey.

So, while your dog can’t look up like you can, he will spot you coming towards you even in the dark, before you’ll spot him!